Speed up! Here is another 20 items. We’re finally out of the ensouled woods, so to speak.

“Bonds” Glowing, crude, red gouges adorn this weapon. Inscrutable at first, they twist to form letters and words as they are looked at. They always spell out twisted and devious threats of pain and suffering in the watcher’s native tongue. Upon striking a foe, binding spectral chains float around them and bind them to a contract. Name a contract to bind them to: “do not move from that spot for 1 round”, “do not attack the contractor for 1 round”, “attack next round”, or “move away from that spot next round”. Intelligent creatures are magically made aware of the contract and if it is purposefully broken, the contract deals 3 damage. Unintelligent creatures cannot be contracted and simply take 1 damage instead as the spectral chains fall through them. Like deals with a devil, the creature need only conform to the letter of the contract, not necessarily the intent.

Silent, blood-red chains adorn the hilt of the weapon. Like the lesser version of this weapon, the wielder names a contract upon striking a foe. Stronger contracts are available for this stronger infernal weapon: one of the lesser contracts that lasts 2 rounds instead of 1, move to a certain spot next round, or attack a specific ally of the wielder next round. Breaking the contract deals 5 damage. Unintelligent creatures just take 2 damage.

Miniature, ghostly imps take up perch upon a greater infernal weapon, silently cackling and cutting the arms of the wielder leaving the same glowing red marks, this is painful but non-damaging. A greater infernal weapon has the most powerful and binding contracts: Lesser contracts for 4 rounds, normal contracts for 2 rounds, attack one of contractor’s foes next round, must drop a specific item next round, or must help you next round. Breaking the contract deals 15 damage. Unintelligent enemies just take 7 damage.

“Balance” Perfectly ordinary, a Rilmani weapon exemplifies balance and neutrality with an exceedingly normal number of stains, knots, and scratches. It can be easy to mistake these ensouled weapons for their non-magic counterparts. Time is the ultimate balancer of the unbalanced, and a Rilmani ensouled weapon takes advantage of this. Hitting a foe moves its wielder up 1 point on the initiative order for the following rounds and drops the foe down 1 initiative point in the following rounds. If the wielder would gain an initiative point but is already acting first, drop the wielder’s initiative by 20 and they take another turn in that round at that new initiative order. The reverse is true for their opponent, if they would drop initiative points but are already acting last, they lose their next turn and gain 20 initiative.

A Rilmani ensouled weapon seems, in almost every way, to be a well-aged mundane weapon, and only magic can detect the difference. This functions like the lesser version, but the initiative changes are +2 and -2 instead.

Thin, settled dust puffs off of the weapon each time it is disturbed. Errant cobwebs string from the weapon to nearby surfaces if it is set down. The wielder appears twenty years older, or a proportional amount for non-humans. As the normal ensouled version, but the initiative changes are +4 and -4. When striking an enemy, they must make a CON save, DC 15 or be slowed for 1 round and the wielder is hasted until the end of their next turn. 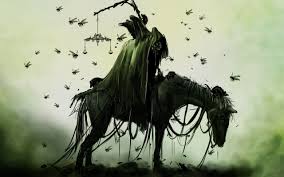 “Death” Always cold and a little moist to the touch, a weapon holding the soul of the undead gives its wielder a slight chill up their spine. When it deals damage to an enemy, this weapon spreads out a cool, foggy death pall. It deals 2 necrotic damage to other creatures within 5 ft. of that foe, excluding the wielder. This necrotic damage is doubled if that hit killed that enemy. Creatures that take this necrotic damage get disadvantage on death saving throws and healing they receive for 1 round.

The chill of the dead soul inside numbs the hands of its wielder, almost painfully so. Like the lesser version, a weapon so ensouled deals in death. The necrotic damage increases to 4 damage and the penalty duration is now 2 rounds.

Dense fog rolls off of a weapon that harbors such a strong fragment of undead soul. The weapon shimmers slightly, as if wrapped in the faintest and most immaterial of cloth. A greater undead ensouled weapon deals 6 necrotic damage to foes within 10ft, and the penalty on death saving throws and healing lasts for 5 rounds. Enemies that die from the initial necrotic burst, release their own necrotic burst and deal damage as if killed by the weapon itself.

Like the tides, this weapon varies from being cool to the touch to frigid iciness. In any level of humidity, water droplets condense onto this weapon and freeze in small teardrops as the weapon grows colder. A water elemental’s soul confers shifting strength to an ensouled weapon. At the start of combat, this weapon deals 1 cold damage. After a successful hit, it deals 1d6 cold. On the next hit, it will deal 2d6 cold. Reaching ‘high tide’ it returns back one step on each hit, and starts over upon reaching 1 cold damage.

Changing weight and balance, the elemental soul within pushes and pulls the wielder side to side. Like its lesser cousin, this weapon confers bonuses that grow then diminish with successive hits: 1 cold damage, 1d6 cold, 2d6 cold, and 3d6 cold with 1 round of slowing from blue frost spreading over their skin.

Attacks with this weapon are followed with a deluge of water and the sound of a wave breaking. Normal fires within 5 ft. of the wielder and the target are extinguished. The weapon shifts its bonuses cyclically, cresting to a peak then settling down: 1 cold, 1d6 cold, 2d6 cold, 3d6 cold with slow for 1 round, and 4d6 cold with stun for 1 round as the foe is frozen in ice. A greater water elemental’s soul holds more command over its own tides and starts at 2d6 cold instead of at 1 cold damage at the beginning of combat.

An ethereal reach weapon shimmers with a faint, see-through green like a silk curtain billowing through a shaft of light. Weapons so enchanted can strike ethereal targets as if they are weren’t ethereal, and five times per day can strike with extended reach even through solid, non-magical objects. This gives an additional 5 ft. of reach for melee weapons and no range penalty for ranged weapons.

Rare and elusive deposits of translucent, silvery ore found only in the endlessly floating rocks of the astral plane, metal weapons made of forged etherium are not easily bound to any one plane. They can strike creatures as if they were on the same plane as the wielder, for example: astral projecting, blinking, shadow walking, phasing, or ethereal. Such weapons are, however, also blocked by solid barriers manifesting in other planes as well. Outsiders killed with an etherium weapon die instead of just reforming on their home plane. Etherium weapons are always well made.

This slightly singed oaken long spear can summon fires at the feet of its target. Three times per day, it can be called upon to start a 5 ft diameter fire as part of an attack. This non-magical fire goes out on its own in five rounds under normal conditions.

Fire alights down one oily half of a gold and silver hued shortsword and icy fog billows down the other half. It is a +1 weapon that deals an additional 1d4 fire and 1d4 cold damage. Dealing damage with this weapon shoots a firebolt for 2d6 fire damage at a target within 60 ft and restores a 1st or 2nd level spell or spell slot.

Long used by Salamanders for their foot-soldiers in their incursions into the mortal plane, this +1 longsword can be set ablaze or called to lash out with fire. It deals an additional 1d6 fire damage when ablaze, can be lit or extinguished at command, and provides light as a torch when lit. It can also throw fire while ablaze with a lashing fiery tongue. Each day, it can throw five firebolts of 2d6 fire damage each. Up to two firebolts can be fired as part of any attack, at up to two targets within 60 ft. When it has thrown its last firebolt for the day, it is extinguished and cannot be set ablaze again until dawn.

This delicate, +2, porcelain-handled sickle is painted and carved with a fine relief of cherry blossoms, too bad it has hundreds of small cracks. Attacking with this weapon reveals its true nature as it shatters into a cloud of twirling flower petal blade shards that slice into all creatures in a 5 ft. radius from a center-point within reach. This attack ignores armor and cover. After the attack, the blade reforms with another small crack. If broken, it reforms in 1d6 rounds.

Flowing magma rock shaped and cooled into a weapon by lavamancers. Heat and aggression flow through the weapon. +1 attack and damage but -1 AC.