I’m almost done with my brainstormed list of magic weapons, the next post will finish them out. If you’ve got some cool ideas for weapons or armor or are looking for mechanics to flesh out a magic item idea, comment below. 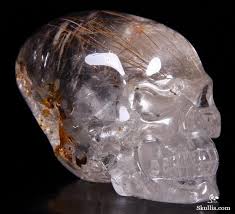 Dusty pastel crystal mined from huge veins deep in the earth. The purple, pink, green, white, and blue varieties can all be alchemically treated to function as a weak substitute for a bladed, crushing, or piercing weapon. Quartz weapons drop down by one damage die size and have their quality decreased by 2.  The crystal does act as a secondary focusing lens for the magical energies of spells and inherent abilities, albeit with some instability. Two spell effects that require concentration can both be held by making a DC 10 casting check each round, concentration on both effects is dropped on a failed check. This check uses the casting ability modifier of the wielder and their proficiency bonus.

The handle softly molds to the hand that holds it; a returning weapon that is thrown will quickly slide, bounce, and glide back to its thrower’s hand after the attack. If the thrower cannot hold the weapon or they are no longer in the same spot, the weapon will drop to the ground where it was thrown from. This feature lets the wielder make multiple attacks in a single round using the same thrown weapon.

A thick wool sap is filled with dust and sand. It deals non-lethal damage with chance of putting enemies to sleep. On a hit, the target must make a WIS save, DC 12, or fall asleep for a number of rounds equal to the weapon damage die result. On a critical hit, the DC increases to 20 and the duration increases to minutes. If the wielder has put someone to sleep with the Sandman since their last long rest, their dreams will be more pleasant that night, granting +1 comfort.

When applied to ranged or reach weapons, a Seeking will cause a weapon’s attacks to curve around obstacles and corners to hit a target’s vital points. Cover and corners are ignored, but the wielder must have line of sight or a known location of an enemy to target them. On a miss that is less than 5 under the target’s AC, the weapon does half damage instead. Seeking weapons have an increased critical range of +2. 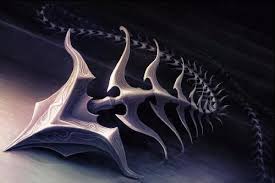 Segmented weapons utilize superior crafting techniques to break a weapon into segments and join them with flexible material. This flexibility allows them to be extended or stretched. Melee weapons gain five more feet of reach while ranged weapons take advantage of higher tension and leverage to double their range. When a segmented weapon is extended in this way, its attacks take a -2 penalty. Segmented weapons are also easier to break when extended which decreases their quality by 1.

Dark, inky shadow creatures enslaved by Void Lords in the Plane of Shadow mine this blackish-brown, flowing metal. Its sale to outside planes makes these lords rich and fuels their dark machinations. Smelted with material plane iron to form workable metal, Shadow Ink draws darkness to itself. The wielder of a Shadow Ink weapon gains advantage on stealth checks and attacks made with advantage deal an extra 1d8 necrotic damage. Alternatively, the interaction of this metal with the Plane of Shadow lets the wielder stab the shadows of an enemy, dealing 2d8 necrotic damage to them as an unavoidable attack. This attack can only be made in well lit areas. 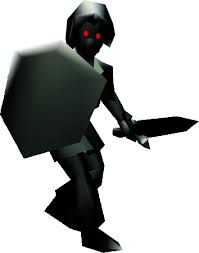 Void Lords would often commission these weapons for their trusted assassins in order to kill targets that would otherwise be too well armed and trained to be murdered easily. A Shadow Mirror is normally a completely black +1 shortsword. By cursing at an armed foe within reach in Voidwhisper, the language of the Void Lords, this weapon turn the wielder into a black, shadowy copy of the foe. This shadow-illusion covers the blade and wielder but does not change them. If the marked foe attacks within reach, the Shadow Mirror lashes out. One free attack of opportunity for each attack that the enemy makes, with the shadow-illusion mirroring the movements of the foe. The mirrored attacks only deal half damage.

Once the enchanting is complete, deep cracks spider web throughout a Shattering weapon. When a Shattering weapon hits, it showers the area with damaging shards in a 15ft cone for one weapon damage of force damage. The weapon is not harmed from the constant shattering, the shards are actually force blasts concealed to appear as shards of the weapon.

A war-pick that is reinforced with thick metal along its wooden haft and is adorned with a symbol of a crumbled keep surrounded by shattered swords. The Shatterspike acts as a +1 war-pick, a versatile weapon that deals damage as a club in one hand or as a mace in two hands. It vibrates violently when it strikes inanimate objects, dealing quadruple damage to non-magic objects or double damage to magic objects. Once each day, the vibrations can be focused in an attack to shatter a piece of equipment on a struck foe. That foe must make a DEX save, DC 15, or have that item broken.

Verdigris etched thorns, vines, and animals adorn a Shifting weapon. For any creature with the ability to change forms, these weapons are a boon. Shifting weapons meld their master’s new form. Their new form will have verdigris etching wrapping around claws, beaks, horns, or the like. Any magical or alchemical bonuses applied to that weapon continue to apply to one of the new form’s attacks, chosen at the time of the change. If the weapon damage die is larger than the damage die of that attack, that attack increases its weapon damage die size by one. Multiple shifting weapons on one attack type do not stack.

A simple masterwork scimitar with an elaborate gold handle that carries a dry air about it. Swings of the blade fling sand and when it rolls maximum damage, that sand blinds the target. They remain blinded until they spend an action tow wipe the sand from their eyes.

Silver weapons are of moderate effectiveness for channeling magical energies. Spells cast through a silver weapon deal an extra 2 damage.

Sizing weapons are enchanted with a simple transmutation charm that allows them to resize to the hand of any wielder between tiny and huge size.

Greater sizing weapons have a resizing charm like their lesser cousins, but can also use the transmutation effect offensively. The enchantment allows the wielder to increase the size of the weapon to a larger size to increase its damage. Greater Sizing weapons can be commanded to increase in size: going up one weapon damage die size, increasing reach by five feet or doubling the range, and imposing disadvantage on attack rolls. Growing the weapon more than one size larger than the wielder’s size category makes the weapon too large to wield. Shrinking the weapon just decreases weapon damage die size. The size limitation is expanded  to include diminutive and gargantuan sized weapons.

Designed with some skill use in mind, a Skilled weapon is either magically or mechanically enhanced to improve the use of that skill. The weapon offers a +1 bonus to that skill.

A Greater Skilled weapon offers a +2 bonus to the skill that it was designed to aid. The skill bonus type manifests more visibly upon the weapon: it is perpetually coated in blood to aid in intimidate checks, has loops or attachments to aid in climbing, has tool compartments to aid in lockpicking, or other modifications.

This beast-tooth barbed whip deals damage like a +1 dagger but with a reach of 15ft. and a minimum range of 10 ft. Three times each day, barking a command during an attack will force that creature to make a WIS save, DC 12, or obey. This functions as the Command spell. On maximum damage, the save DC increases to 15 and the duration increases to 2 rounds.

A dull silver arrowhead on a shaft fletched with down, these arrows deal non-lethal damage and poof into a cloud of downy feathers. Any creature struck must make a WIS save, DC 12 or fall asleep for 1d6 minutes. On maximum damage, the DC increases to 20 and the duration increases to hours. 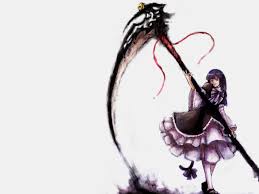 Bone white wood, worn smooth, forms the handle of this shining, black-bladed scythe. The Soul Reaver deals its weapon damage as necrotic damage. It is a +3 scythe. On kill a formerly living enemy, the Reaver captures their soul. Each ensnared soul provides a +1 bonus to attack and to weapon damage for 1 week, with a maximum of 13 souls. After this week ends, a soul is been completely consumed. When the Reaver is engorged with 13 souls, additional souls are drained but not destroyed and provide 5 temporary hit points to the wielder. On a critical hit, the enemy must make a CON save DC 15 or die. Souls faintly hover in miniature above the scythe. No good creature can wield this weapon, any that do will take 1d8 necrotic damage each round for attempting to do so.