I’m still drawing up some maps and writing up descriptions for Hog’s Bog, but I’ve been seeing a number of my friends post on Facebook talking about voting ID laws, the race for Illinois governor, and more generally about upcoming votes that November always entails.

The more important question is whether you believe that others have the right to disagree with you. When I say this, I mean real disagreement. Being forced to associate with or fund policies and people I oppose is not any real form of allowed disagreement. It would be just as meaningless declare the existence of a freedom of speech while allowing punishments for speaking against a societal norm or a belief held by those with power.
If you believe that other people should be allowed to disagree with you, then you don’t need to be converted or persuaded to be an anarchist* because you will not threaten anarchists into supporting your beliefs.
As you enter the voting booth, remember that votes, government policy, and politicians are all threats against those who disagree with you. These threats range from taxes and fines to imprisonment or police violence. 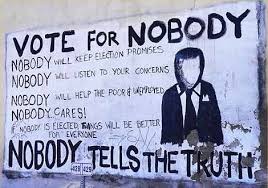 *Not that I’d mind more anarchists in the world. Check out my Intro to Anarchy post for some hyperlinky goodness or contact me. I’d be happy to chat and I wouldn’t mind hearing your perspective on voting, government, and philosophy.