Design a site like this with WordPress.com
Get started
Skip to content
Check out the previous 20 armors in Part I.

Occasional, painful sparks leap from the armor when it touches grounded or metal objects. Attackers within 5 ft. take 1d6 electricity damage if they hit.

Cool to the touch, a chilled armor is covered in a thin layer of water droplets in the presence of any humidity. Attackers within 5 ft. take 1d6 cold damage if they hit.

Made of large insect exoskeleton or from many woven smaller carcasses, chitin armor gives advantage against poison for saves when the wearer applies poison to a weapon and against contact poisons. Medium armor costs twice as much, and heavy armor costs thrice as much. 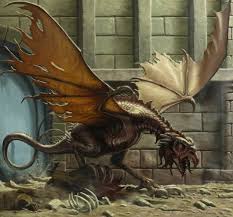 This +1 scale male consists of metal scales covered by glued on, grey-green cockatrice scales and brown feathers. Stone dust hangs in the air near the armor, slowing the joints and limbs of attackers within 5 ft. Attackers lose 10 ft of movement speed with each attack, this slow effect lasts until the end of their next turn. Thrice each day, the wearer can bunch up their shoulders to fluff out the feathers and scales. The next attacker drops to 0 movement speed. A CON save, DC 12, will end the effect. If the creature fails this save twice in a row, they turn to stone permanently. After all three uses of this ability, the feathers and scales on the armor grow dull and limp, while the armor loses its magical slowing effect until the next dusk.

A non-magical alteration to the armor confers a +2 bonus on saves against one type of combat maneuver. Examples of this effect include locking gauntlets (saves against disarm) or well-balanced armor (saves against trip).

A magical modification to the armor confers a advantage on saves against one type of combat maneuver. This effect might include earth elemental rocks in a boot heel (saves against force back), or the lucky coin of a thief hammered into breastplate (saves against bluff).

Padded and ergonomically designed armor allows its wearer to sleep in the armor at no penalty.

Copper channels and plates conduct magic away from the most vulnerable body parts, at a cost of the overall durability of the armor. Reduce the damage by 2 from all spells targeting the wearer or reduce their duration by 1/4. -1 penalty to quality.

Piles of rusty iron plates are bolted, jointed, and twisted together into a vaguely humanoid shape. This rusted out +1 plate mail corrodes any non-magic metals that it touches. This only affects their appearance. Any metal weapons that hit or that strike the armor, those that would hit if the wearer was not wearing the armor, have a 3 out of 6 chance of taking a cumulative -1 penalty to attack and damage until they are resharpened. It is rusted to uselessness if this penalty equals its maximum weapon damage and cannot be repaired. Three times a day, the wearer can make a fist then reach out with a rusting grasp attack. This attack rusts away non-magical metal of up to 30 pounds or rusts a magical metal item to uselessness, needing 1d4 hours of intensive care before it can be used again. If the metal item is held, its holder can make a DEX save (DC 16) to instead take a cumulative -1 penalty to all rolls with that object until it is repaired. Magic items receive advantage on this save. After all three daily uses are made, the armor’s rust recedes, leaving a faintly brown, battered iron plate mail armor that does not corrode metals until the rust is allowed to return overnight.

Etched and pitted with acid, corrosive armor spits back at attackers within 60 ft. with 1d10 acid damage. The slow, but constant acidic sweat on this armor deals the acidic damage each round automatically to any creature or object grappling with or binding the wearer.

Fitted to the wearer, custom armor imposes disadvantage on anyone else that tries to wear the armor. This effect can also include cosmetic effects and other minor features.

Very specialized armor designed to fit one person, even down to the smallest detail of joint articulation and body weight distribution. Specialized custom armor is treated as being one armor category lighter for encumbrance purposes but it imposes disadvantage on others who try to wear it.

A thin, black shawl curls around and clings to the wearer. This Shawl is rumored to be an invitation or a trial run created by Death for would be reapers of souls. Cool to the touch, it acts like +3 leather armor. By pulling the shawl tighter around their whole body, the wearer can become invisible three times each day. This invisibility lasts for 5 minutes or until the wearer makes an attack. The Death Shroud whispers telepathically how weak the creatures around it are, granting knowledge of their remaining HP. If the wearer drapes part of the shawl over a creature that died within 5 rounds, the shawl dries the corpse into dust and bones, granting 10 temporary hit points to the wearer. The Death Shroud wearer holds Death’s favor, who grants them advantage on death saving throws (halve the result on the death and dismemberment tables).

Deflecting shields have a mirrored finish on metal shields or a polished metal plate on the face of non-metal shields. The polished metal has some give, like a dense sponge. The wearer can use their reaction to deflect a single projectile such that it misses harmlessly or impose disadvantage on a ranged magic attack.

A +1 leather armor made from the cured hides of demons, sewn with hair of the bearded devil and dyed with the blood of the innocent. This black-red, squirming leather cuirass grants advantage on intimidate (or on intimidate damage rolls), resistance to fire, and 1/day the wearer can cast fear as the spell, with DC 14.

Collected from mummies, Desiccated Wrappings are a bundle of rags and bandages wrapped around the wearer. When worn, they dry out the wearer, reducing their max HP by 2 per HD. When removed, 1 maximum HP returns each day as the creature re-hydrates. Desiccated wrappings reduces the wearer’s body weight by ½, gives regeneration 5, confers resistance to poison and necrotic, and reduces the need for food, water, air, and sleep to ¼ the normal amount. The bandages take an entire hour to don or remove but act as +3 scale mail. Attackers within 5 ft contract Dry Rot when they attack unless they make a DC 15 CON save. The onset delay for Dry Rot is 1d4 days, after which the afflicted must make a CON save, DC 15 each day. On a failure, they lose 1/10th their body weight and must drink twenty normal rations of water that day or gain one level of exhaustion. The disease requires 3 consecutive successful saves to overcome, and no magical healing can remove the exhaustion levels or restore the body weight loss until the magical disease is cured. The wrappings’ magical properties will not function for 3 rounds after taking radiant or fire damage.

Disguised armor is built into, or crafted to resemble, normal attire. It confers advantage on checks to conceal the armor as well as allowing the armor to be worn without suspicion from bystanders.

A cape of downy feathers drapes over the shoulders alongside a decorative, white +2 scale mail. Any magical attack against the wearer is transformed into a swarm of doves, centered on the spell’s target, equal to the spell level or the spell or effect. This includes spells of which the wearer is one target of many and even area spells. The swarm of doves will attack at the originating caster’s commands on their following turns. If the source of the spell is mindless, the doves target the wearer and nearby creatures each turn. The doves will shatter into shards of light, dissipating harmlessly after 1 min. per spell level. Dove Swarm: 1HD (5hp), ATK 1 (Beaks and Talons) DAM 1d6, saves as a F1, Move 5ft/Fly 50ft. *The doves gain 2HD (10hp), one five foot cube of size,  and 1d6 damage for each spell level of the transformed spell. **A swarm’s attack hits any creatures in a space the doves occupy.

Made of the bones of dragons that are necromantically infused to function as well as tempered steel, Dragon Bone confers a +1 on saves against the element of the type of dragon it is from. As effective spell channels, this armor doubles the duration of any spell of the bones elemental type cast on the wearer, or where the wearer is in the area of effect. Medium armor costs twice as much, and heavy armor costs thrice as much.

Part III is up next.