EDIT: This is actually hex 22.13, I mixed up the numbers.
EDIT 2: Here is the completed draft.

So, instead of the usually scheduled magic items, I decided to put up the rough draft on the second hex I am working on for Tenkar’s Landing crowdsourced hexcrawl. I am going to be adding to this draft a random encounter table, some monster stats, and some town maps. You can see my previous hex here: Hog’s Bog’s Bugs. I decided to take it in a different direction than I thought I would, let me know what you think so far! PDF 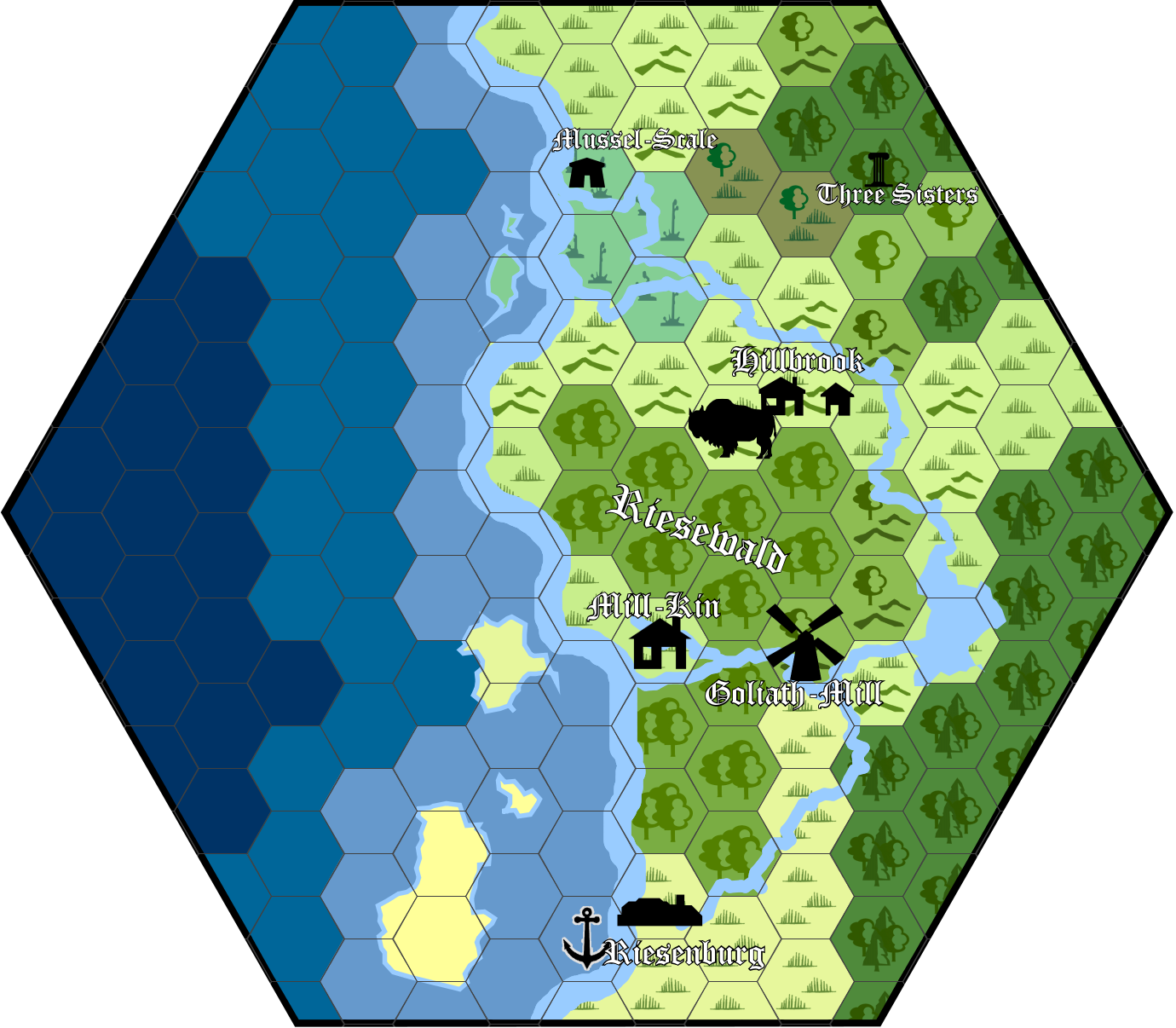 Giant’s Bay
What had long been a part of the forested grasslands of this coastal land was colonized by an outcast clan of giants from over the mountains to the east. They have settled into a comfortable way of life here, growing their massive, red-wooded trees for lumber and tending their flock of massive buffalo. Lizardfolk from the north have adapted specialized tactics to hunt these giant beasts, although they amount to little more than pests to the giant folk. Various animals and creatures are likely to be found here. Centaur hunters search the woods to the east of the lake, while lizardfolk prowl to the north looking for easy prey. In the heart of this hex is the giant red-wood, where one may occasionally encounter a giant-folk woodsman. In the grasslands and grassy hills, it is not uncommon to encounter a herd of giant buffalo, with or without a giant rancher. The north-western woods are mysteriously empty of any large predators.

This small town is a collection of a half-dozen small (for a giant) sized homes. Altogether, the village is home to 124 giants, 12 half-giants, and 4 humans. They work together to tend the dozen or so herds of giant buffalo that roam the grasslands between the forest and the river. A hopeless blacksmith and a kind tavernkeep together run the only shop in town, the Horseshoe & Ale. While the blacksmith, Karda, is only useful in making nails and horseshoes (and the like), she brews a pretty strong ale as a hobby. Her husband, the tavernkeep, is soft-faced and runs a fairly clean inn.

A cluster of three giant-sized homes sit at the end of the river, docks tied up with single-giant boats. The homes here are only fully occupied at the end of every week, when the lumberjacks come home from the mill. A few children, men, and women tend the small vegetable gardens and work around the hamlet.  The homes themselves are elaborately built log-cabins that house a total of 48 giants.

Some 30 odd giants work as lumberjacks and loggers, cutting down the massive redwoods of the Riesewald, sawing them in this water powered sawmill, and floating them down the river to to Riesenburg. In the springtime, the giants work to replant new redwoods and tend the young saplings growing in the gaps between the older, larger trees. The mill is run almost communally, but the group tends to defer to the master carpenter and lumberjack, Tyraksus Redhome. The old giant is supposedly one-sixteenth fire giant, and has a fierce temper and matching sense of duty.

Populated from the handful of redwood seedlings the recent giant settlers brought with them, the Riesewald is a forest of hundred foot trees, with some thick enough that a two-horse cart could easily pass through it. The giants of this region are very protective of their trees, and any outsider caught with a seed or sapling will be bribed, cajoled, threatened, or even attacked if necessary to protect the giant’s arboreal legacy.

Riesenburg is a giant town that has been producing high-quality ships, carpentry, and wood. over 500 hundred giants call this town home, along with many dozens of humans and demi-humans. Their docks and shipyard is well equipped as a small trade-hub and the market is fairly well stocked with a variety of trade goods. The town proper is run by a council of elders, elected to their positions on the council of three. The council is on friendly terms with many seafaring kingdoms, and appreciate trade and foreigners.

Three marble chalices, standing to a height of three feet, are arranged in a triangle inside a circle of large moss-covered boulders. It is rumored to be a part of a grand prophecy about the redemption of an order of druids who have lost their way. The chalices are indistinguishable by sight, but have different magical properties. Once each day, any liquid placed in one chalice, also appears in equal measure in a second chalice. When any liquid is placed in the third chalice, it drains away to nothing. If one clears away the moss from the stones encircling the chalices, a phrase can be seen written in druidic, the starting word is uncertain and no punctuation or hint is present. “Nature We Forgive That Act Then Understand Life And Death For”.

This tribe of nearly one hundred combatant lizardfolk and twice again as many non-combatants take their name from their unusual raiding patterns. They scour the riverbed for thick mussels to eat and to use in the construction of a crude scale armor, Macana (bladed clubs), and chimalli (bladed round shields). They use these implements, covered in mud and grasses as highly effective camouflage to separate, surround, and hunt the giant buffalo to the south. One buffalo can feed their entire tribe for many weeks, and the hide is used for shelter and in trade to lizardfolk further to the north. The shaman, Soft-Wind-Upon-The-Grasses (a skill denoting his very high skill in stealth and hunting) is adorned with buffalo horns and skull armor lashed with the characteristic black and white mussel shells.