I saw this rather fun ranger archetype over at Harbringer of Doom, Stormcloak Ranger, that turns the ranger into a storm of vengeance type marauder. I commented that it would be nice to see a druid compatriot for the Stormcloak Ranger. Brandes suggested I give it a go and here we are.

Turns out, creating class archetypes is rather fun so you can expect to see some more in the future. Just off the top of my head, I’ve thought up some ideas for a Circle of the Loam Druid and a Ghostcaller Bard.

Circle of The Tempest Druid Archetype

Storms are the embodiment of nature’s wrath, and their power is embraced by those seeking retribution on the wrongs of civilization. Druids within the Circle of the Tempest turn their attunement with nature into a honed weapon, wreaking havoc. Some become a wandering locus of devastation while others hone in on a target for vengeance, a lightning strike against those who invite nature’s wrath. Tribes losing their homes to aggressive settlers or people wronged by expanding urban sprawl are common gateways druids have found their way into this circle. While it lacks anything outsiders would describe as a hierarchy, its members convene in the eye of great storms. Their meetings exist to note successes and discuss the most important targets, with the most destructive and powerful druids holding more sway.

Circle of the Tempest

When you choose this circle at 2nd level, you gain the shocking grasp cantrip as well as the spell Witch Bolt added to your spell list. At the levels below, you also gain an additional spell for your spell list.

9th – Storm Shield (As Fire Shield, but Thunder or Lightning elemental damage, with each protecting against their respective damage types.)

11th – Tempest Strike (As Flame Strike, but with Thunder and Lightning elemental damage instead of fire and radiant damage.)

Whenever a Druid of this Circle casts a spell that deals Thunder or Lightning damage, they can choose to add route the spells energy through their body. This forces them to suffer the same effects as the target(s), with the same save DC. Channeling a spell this way restores a number of spell levels to the druid equal to half the cast spell’s level, rounded down.

Starting at 6th level, the druid can choose to ignore any non-magical weather’s effects. In addition, the druid has advantage on saving throws against magically created or manipulated weather effects.

When the druid reaches 10th level, they gain the ability to channel nature’s fury through the less vital parts of their body, rerouting it to the ground or even their foes. The druid can use their reaction to gain resistance to thunder and lightning damage until the end of their next turn.

A Druid of the Circle of the Tempest can choose to channel the resisted damage to a target within 30 feet, blasting the target with rippling lightning or thunder pouring from their fingertips. Once they have redirected energy in this way, they cannot activate their Nature’s Conduit ability again until they complete a short or long rest.

Eye of the Storm

Upon reaching level 14, the druid can now expend a use of the Wild Shape ability to take on aspects of a great storm. Dark clouds billow out from the druid as a rolling carpet of electricity curls around their form. As a bonus action, the druid can strike out at a creature within 30 ft for 3d6 electricity damage, with a successful Dexterity save reducing this damage by half. The druid has concealment and can use their reaction to create a thunderclap in response to being struck by an attack. The thunderclap acts as a Thunderwave to all creatures within 15 ft, dealing 2d8 Thunder damage and pushing those creatures back 10 feet on a failed save. A successful save reduces the damage by half and negates the push.

The druid can maintain this effect for a number of minutes equal to half their druid level, rounded down. Strong winds swirl around the druid while they are the Eye of the Storm, picking up small objects and imposing disadvantage on ranged attacks within 15 feet. 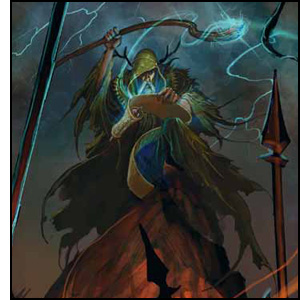