Strength. Unending hordes. Indestructible will. These are the orcish inheritance and the land you sweep over to claim will be what you add to that inheritance for our own brood after you. Every orc knows intimately the fires and wages of war, but under the command of a clear mind, all will be swept away in a campaign of steel. Greater numbers are useless until your enemies stand divided and surrounded, and where you cannot divide them, box them in and starve them out. Your soldiers loyalty is among your greatest asset, so guard it with your life and never cheapen it by throwing their lives away.

F: Surround and delay the hero’s soldiers, ordering your troops to protect themselves while you move past these front-line troops to the softer targets around them. Keep soldiers in reserve to keep up the pressure on these fighters. If you are low on troops, keep the fighter engaged with repeated one-on-one duels. Once the other threats are resolved, overwhelm them with force, coordinating your attacks if the fighter is highly defensive. Screen the fighter away from yourself so you can stay appraised of the battle and direct your troops effectively. 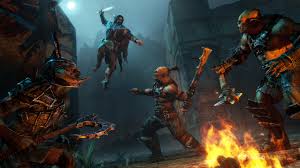 T: Dishonorable thief scum will try to sneak around to stab you in the back. Identify them by their stature and tiny knives, never lose track of their position, and keep them pinned down by at least three soldiers at all times. They cannot handle large numbers and quickly fall when surrounded or even just flanked by a few dedicated blockers. If they disappear or hide, make sure your high priority targets are guarded and away from obscuring conditions.

R:  Skilled hunters and bowmen, these foes are good at taking down exposed leaders or stragglers, and are especially good at dealing damage at a distance. Keep your important targets out of their line of sight and tell your lone warriors to protect themselves. Rangers are weak against large numbers up close. Do not give them the high ground or allow them to position with long sight-lines where they can wreak havoc. Shield walls, staggered lines of soldiers, and choke points are the key to getting close enough to disable them. Box them in and cut them down.

W- Enemy magic users will be able to take out large swaths of troops with the right spell but they themselves are quite soft. Wizards and the like may as well be made of glass for how easily you can smash them if you get close. However, their magic must not be underestimated. At the merest whiff of a magic user, spread out your troops to mitigate the possible damage. Try to mislead them about your troops movement speed and reach until your fastest scouts can close the gap. Regularly practice scattered formations so that response to area attacks is near unconscious. Decoys and ambushes are the most useful tools to catch the magic wielder unprepared and minimize casualties. Ranged, reactive attacks can be held in reserve to disrupt their spellcasting as soon as they start.

To ensure that you, your tribe, and your descendants see all that is there due, you would do well to drink in the wisdom covered below. Strength and superior numbers will see you and your kind through. Never buckle under the thumbs of another. Strike for the throat. Conquer all that lies before you.

1 thought on “The Art of Being a Monster: Orcs”