College of the Shepherd

Bards of the College of the Shepherd find themselves with a special calling in dealing with the dead. Whether their ability to sense the presence of the departed is recent or something they have repressed from a young age, their songs and melodies resonate with the ghosts of the dead. Taking up the mantle of a shepherd for lost souls, bards of this college learn to tune their abilities in communicating with the spirits left behind by the deceased.

These bards travel the lands to find ghosts and put them to rest. Some see themselves as the protectors of the departed while others seek the knowledge and power of the spirits, offering their services in exchange.

Starting at 3rd level, you learn an ancient melody or song that reveals the trace remnants of the long deceased. As a ritual taking five minutes to perform, you call out and a spirit will respond. Ghosts and spirits of this nature are the imprints left behind by powerful souls or by those who died emotional deaths. These impressions are distinct otherworldly entities that encompass a dying reaction, emotion, or mental state of the deceased. Shortly after death, the spirits are the most coherent, but as they lack any ability to learn or think, defaulting to set responses in new situations, they quickly break down. The remnants of this breakdown, pure emotions barely tied to their former lives, are what a bards call out to for aid and to put to rest. Each ghost has a personality trait, a power (oftentimes related to their passion or cause of death), and a request. 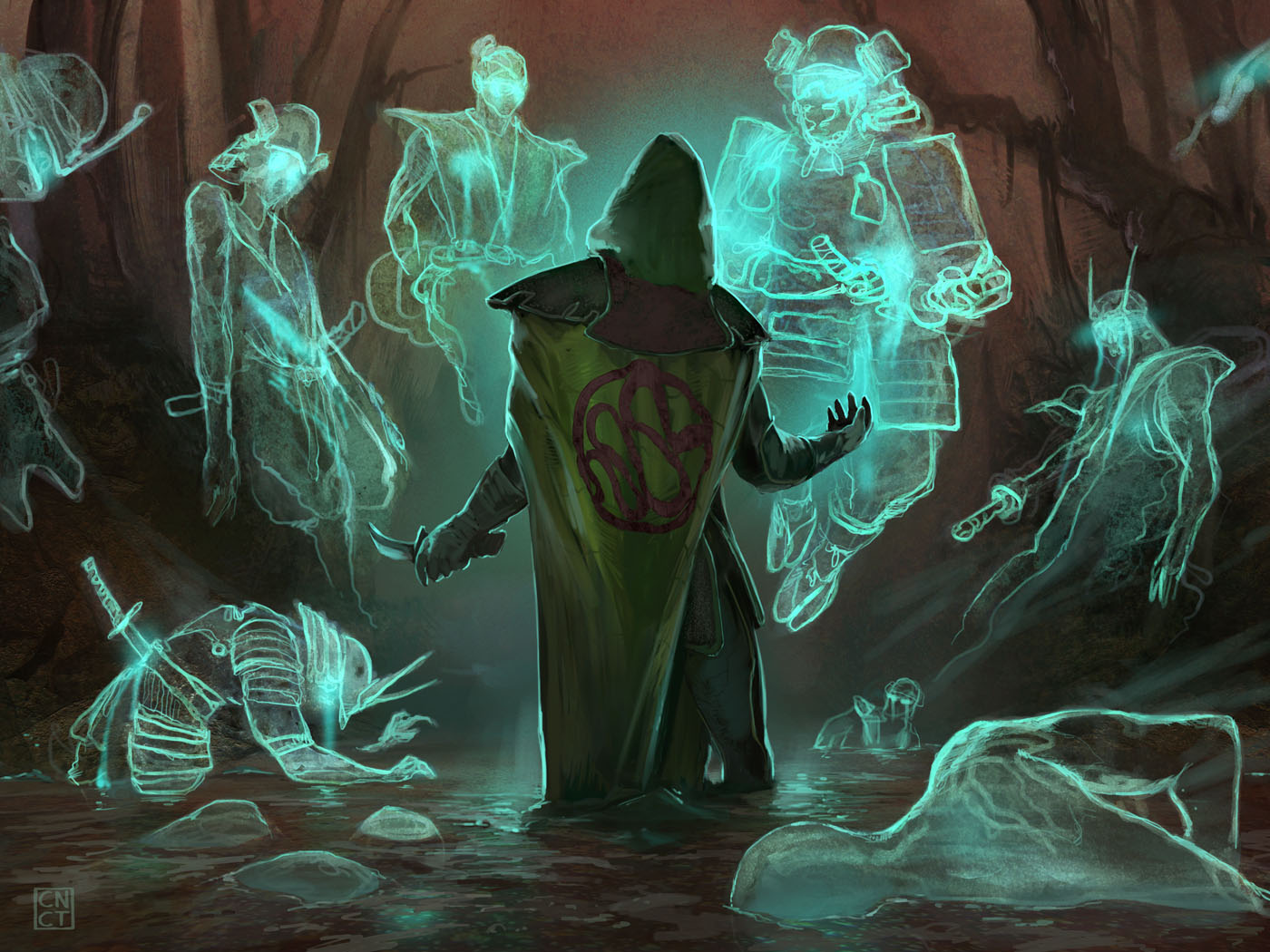 You may expend a use of bardic inspiration to bind this ghost to an item. Whoever wields the item may call upon the ghost within to activate its power, using your bardic inspiration die for the magnitude of its effects. Below is a table showing possible personalities, powers, and requests. The die size for these effects begins as a d3 and increases to a d4 at 5th level, a d6 at 10th level, and a d8 at 15th level. If the user rolls a ‘1’ on this die, the ghost slips free of the binding and is expended. Ghosts follow your orders on who to serve or take orders from.

At the end of a long rest, any remaining ghosts you have will slip their bindings unless you take hold of the item and expend a bardic inspiration die. Ghosts that have not had their requests met cannot be retained. If the bard breaks a promise to a ghost, the ghost immediately leaves the item it was bound to. Performing this calling ritual in a more appropriate location, such as a graveyard or historic battlefield, may call more than one ghost, allowing you to roll two or more times on the table, choosing which ghost to communicate with. At 6th level, your reputation among the deceased has spread while your soul straddles this life and the next. Three new spells are added to your repertoire: Ether Bomb, Spectral Summons, and Soul Spear. These spells rely on your ability to form stronger bonds with the ghosts you keep, using your own magical energy to empower them to act on your behalf. If you choose release the ghost during the casting of the spell to increase its power, the ghost dissipates after the spell ends. Ghosts are considered soul fragments.

Additionally, you have learned that with your blood, you can feed the ghosts you deal with, empowering them. The ghosts fed with your blood gain increasing awareness, power, and more nuanced reactions. However, they never regain what memories they have lost or were never part of their impression, unless you have clues or trinkets to remind them of their past. By feeding a ghost 3 hit points, you can increase its power to that of a lesser soul. At 12th level, you can pour an additional 7 hit points to further empower the ghost to the equivalent of a common soul.

Spectral Summons calls forth a ghost to manifest as a CR ½ creature of the ghost’s choice. This form usually corresponds to their passion or personality. Using a more powerful ghost in the casting of this spell calls forth a correspondingly more powerful form of the ghost’s choosing. The ghost will know what form it will take when summoned, as determined by the DM, but may be convinced to take a similar form if the bard can appeal to its nature. Beginning at 14th level, when you complete a long rest you gain two bardic inspiration dice. These dice can only be used to bind ghosts. Additionally, you may ask your ghosts to carry your spells. When you are casting a spell, you can instead pass the completed spell energies to a ghost within reach, allowing that ghost to cast the spell at a later time. Give your ghost an order to cast a spell as a bonus action on your turn. Ghosts can only carry a single 1st or 2nd level spell. These spells must have all choices made and material components consumed at the time of casting. More powerful ghosts fed your blood can wield your more powerful spells. A lesser soul equivalent ghost can take a 3rd or 4th level spell and a ghost as powerful as a common soul can use a 5th level spell.

These three spells are part of my paid release on the binding of souls. If you’d like to see more, you can see my post about it here.

With a command, you force a soul out of its container to shower an area with damaging energy. Ether Bomb deals 2d6 psychic damage to a 5 ft. radius centered around a point within range. After attacking, the spirit then returns to its container, exhausted for 24 hours. By cutting the wire wrapping the container during the casting of the spell, the damage increases by 50% to 3d6, but the container is ruined. The spirit must make a Wisdom save against the spell DC or be destroyed. If they survive, they return to their home plane or afterlife.

Components: S, V, M (container with a soul, a handful of dust)

Pressing your will onto a soul within a container you hold, you force it to manifest and aid you, so long as it has a CR of ½ or less. Tossing the dust in the air, the spirit passes through the dust and coalesces at a point you designate within 60 ft. The summoned soul retains the same statistics it had before being bound, with the exception of souls that had their soul size increase or decrease during the binding process. Those souls gain or lose HD to increase or decrease their CR appropriately.

If your concentration on this spell is ever broken, the bound soul you summoned becomes hostile to you if the container is broken before the remaining duration ends, the soul is freed. You may dismiss the summoned soul as a bonus action so long as you still have control over it.

You call upon the entire being of a fragment soul you have in a container from a previous Binding, compelling it to rush forth with all its power, piercing through a single enemy for 2d10 psychic damage. Make a spell attack roll against the target’s AC, ignoring non-magical armor to hit. The spirit then returns to its container, drained of its energy for 24 hours, even on a missed attack. If you break the wire containing the spirit to the container, the damage increases by 50% to 3d10 psychic damage, but the container is ruined. The spirit must save against the spell DC or be destroyed, but if they survive, they immediately return to their home plane or pass on to their afterlife.