To round out my 15 Fantasy Organizations fiverr commission, the same commissioner asked me to do an additional organization custom for them. I figured I can use this singular example to show what you can expect out of a $5 commission from me.

Motto: “Drawing close the cloak of darkness so that we might save the light.”

Logo: A standing humanoid figure whose shadow is armed and armored.

Shadow Hunters are an organization dedicated to eradicating supernatural creatures and blasphemers from the world, hoping to create a better world by purging its corruptive elements. They walk the line of good and evil by being willing to use dark magic to empower themselves to take down the worst supernaturals.  The long-standing group operates out of semi-secrecy to protect themselves from retribution as well as to guard their combat and magical techniques. A technique they are famous for is binding a part of their souls to their weapons and armor to empower them with magic so that magical creatures are not immune to their attacks. A majority of their recruits are those who have survived encounters with supernatural entities or destructive blasphemers.

Aegidius Loebenstein is a recently inducted Dusk Stalker that survived a haunting that killed everyone else in his town. Now that he is beginning to delve into his spirit to bind his weapons and armor, he has accidentally unsealed the corruption inside himself. In his sleep he is calling forth undead spirits and ghosts. When he wakes, he and his branch are beset by increasingly numerous and powerful undead. He has no idea that he is the source, but he is trying desperately to bind his armor and weapons so that he can help although this is exhausting and speeding up the undead summoning.

Wyrmur Master of the Undercity Is the acting Nightfallen and presumptive nominee as the next Nightfallen to replace the previous one lost to plague. Wyrmur has been a highly effective Dark Inquisitor using his background as a smuggler and underworld connections to keep tabs on supernatural movement throughout the massive city. He ensures that his branch is well stocked on all manners of poisons, spell components, arms, and magic items that would normally be out of reach for the Shadow Hunters. Some of the more righteous Dusk Stalkers in his branch suspect foul play in the death of the previous Nightfallen, citing Wyrmur’s sudden change in schedule and reclusiveness. Little do they know that Wyrmur is suffering the same plague-curse as the former Nightfallen, as he desperately tries to find a cure. The curse from a powerful supernatural weakens the Nightfallen leader with each supernatural death in the city or whenever they attempt to tell anyone about the curse. He believes an ancient lich with a longstanding grudge against the Shadow Hunters is behind the necromantic plague, so he spends his nights scouring the sewers and city to find clues.

Davgeon Strifelaugher is an Engamar Dusk Stalker that was secretly replaced by a doppelganger during his last mission. The doppelganger soon after lost their memories during a hunt of a different supernatural. He is very confused to the various memories that are surfacing, but if he ever figures it out, he will be too close to his Shadow Hunter friends to betray them. His fellow doppelgangers are looking for him and think the original Davgeon has returned, but they are not happy and Davgeon will do anything to keep his new identity.

Beatrice Sanningkere is a Volari refugee from a horrible and bloody purge stemming from paranoia over vampires. She takes a long time to trust anyone and is still suspicious that the Shadow Hunters are just a front to get her to reveal where the other refugees went. Otherwise, she is a very efficient and skilled Shade slowly learning to laugh again with her Shadow Mentor, Gias Dromonuil.

Shade: When an existing Shadow Hunter brings in an orphaned youth, takes in a motivated individual, or recruits a new member, that new member starts out as a Shade. At this rank, they are entitled to a cot and three square meals at the Shadow Hunter headquarters that recruited them. It is expected that they hold no outside job and devote their time to practicing combat drills, doing endurance training, learning to repair their own arms and armor, and memorizing common supernatural lore. In the field, they will be assigned as an underling to a Shadow and generally given tasks such as making camp, retrieving basic spell components, or doing investigative background work. Just as likely, they could be put on filing, digging, or searching ancient texts.

Shadow: After a Shade has completed their basic combat training and shown the due diligence to stick through the tedious and sometimes dangerous tasks, they are kidnapped one night and brought to a Shadow Hunter meeting. During this time, illusion spells cast will make it seem as if the Shade has been caught by supernaturals. If they hold their composure, and refuse to sell out the Shadow Hunters, they are initiated into the order as a Shadow. At this point they are given a codename by the attending Shadow Hunters, taught the secret handsigns of the order, and can never break off contact with the Shadow Hunters. On the field, they are now responsible for taking a Shade under their wing, showing them the correct ways to act, imparting knowledge, and testing their skills. To support higher ranks, they are expected to provide ranged covering fire, hold the flanks, and hunt down lesser supernaturals. As they grow to fill this rank, they are given lesson on increasing their awareness of the supernatural. Shadow’s have a bunk and three hearty meals provided by the Shadow Hunters at their local guildhall, plus a small weekly stipend.

Dusk Stalker: At this rank, the member is inducted into the full secrets of the order. Shadows are promoted to this rank once they have held the line in battle without faltering and must have at least a dozen supernatural kills under their belt. Beginning at this rank, a Dusk Stalker is allowed to learn the meditation techniques that go into binding themselves to their weapons and armor. Dusk Stalkers are given command over a small squad of Shades and Shadows that they are responsible for directing, protecting, and using to track down supernaturals. Each Dusk Stalker has a small private room, free access to the Shadow Hunter’s kitchen, a moderate amount of leeway in the Shadow Hunter’s armory and supplies, plus a bonus for supernatural kills made by their squad.

Dark Inquisitor: A Dusk Stalker that has fully completed both their armor and their weapon binding can become Dark Inquisitors. A Dark Inquisitor must show unending patience, exhaustive diligence, and unwavering courage. It is an informal rule that no Dusk Stalker can make this rank unless they have killed a supernatural so strong it nearly killed them in the process. At this rank, the Dark Inquisitor is put in charge of multiple Dusk Stalkers in their normal day-to-day operations but at other times, they are grouped together as an independent Inquisitorial squad to fight particularly dangerous supernaturals or blasphemers. An Inquisition leaves behind the lower ranks that would only get in the way or get themselves killed. Dark Inquisitors keep their small rooms in the guildhall but are also encouraged to build a small, defensive home around the guild hall or its city. This is to ensure multiple fallback locations as well as give the Inquisitors more freedom. Inquisitors are often in charge of acquisitions and have free access to munitions and arms so long as they can explain their choices to the Nightfallen.

Nightfallen: The most seasoned and respected member of the organization, each Nightfallen runs a hall or branch of the Shadow Hunters. They choose when to initiate or promote members as well as commune with other Nightfallen to coordinate strategy. It is their responsibility to maintain funding, set the direction of the branch, and deal out punishments for wayward members.  It is only with their permission may an existing member retire or take a leave of absence, although that member is always expected to keep an eye out, provide shelter for a fellow Shadow Hunter, and maintain a small weapons cache for emergencies. The Nightfallen gather by magical communication spells to choose the Master Nightfallen every seven years, but never in person so they cannot be assassinated en masse by their many enemies. The Master Nightfallen sets the tone of the organization, including how focused the group should be on certain types of supernaturals or blasphemers, how hard the group should recruit, what the training standards are for new initiates, and what constitutes acceptable casualties or collateral damages in pursuing evil. 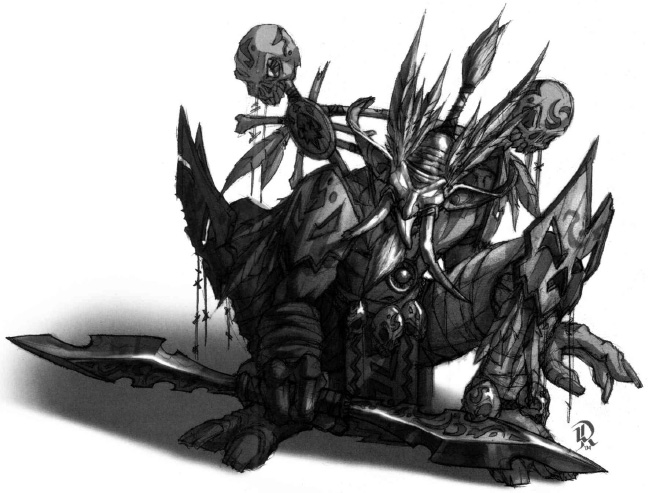 A recent hatching of monsters has flooded a nearby countryside with more supernaturals than the local Shadow Hunters can handle while they deal with the main nest. They are putting out a bounty for each supernatural killed.

When exploring a dungeon, perhaps just after a battle with the strongest monster in the dungeon, a number of Shadow Hunters show up with orders to kill the creature. They might be annoyed that the players took their kill, happy to have the work taken off their shoulders, or even relieved that they, as a number of rookie hunters, do not have to face the creature. In any case, they block off the area to do a secured search and destroy any hidden offspring.

A shadowy, cloaked figure sits in the corner of the tavern. Her face is only visible when she leans forward to take a long drink from a mug of ale, but her face is covered in scars and one eye is a milky-white. If approached by polite adventurers, she will allow them to sit and listen to war stories of her past supernatural hunts. She can prove to be a valuable source of information about supernaturals in the area, weaknesses for rare supernaturals, or a way to join the Shadow Hunters by proving themselves to her.