The path ahead grows darker to the left and brighter to the right, until the group finds themselves standing at a fork in the path surrounded by exotic vegetation. A dense and lush patch of vegetation stands to the left, the sound of buzzing flies and moist air rolling off that direction in waves. Sparse and barren ground, loosely populated by light vegetation, opens up to the right as a cool breeze flows in. Two young children, one on the shoulders of the other, pop out from where the group isn’t watching, even from amongst the middle of them.
Blar, the top child, introduces themselves as a keeper of fine adventure if the group will only travel to the left. He motions wildly, pulling Gar’s hair to get her to stumble in the direction he wants the group to go in.

Gar, the bottom child, chimes in with an attempt at a deep voice that ends up cracking. She notes that adventure is serious business and that there are no shortcuts on her path to the right.

On the left path, the party will be forced to push and cut through thick vegetation and waves of bugs, requiring a Constitution save to avoid gaining a level of exhaustion. In a few short minutes of this hard work, the party comes upon a clearing where a dragon lands in front of them for a fight. It falls easily, as attacks dislodge chunks of trash, revealing the dragon to be an illusion cast over a pile of trash. Once the illusion is dispelled, Blar is sitting atop the mound, shaped like a crude fort, where he will throw down a crown and laurel for each humanoid for saving his fort before gesturing at a path that opens at the other end of the clearing, taking them out to the next hex. The crowns are illusions cast upon something a child might make, revealed should they take damage, be investigated, or exposed to strong wind. The flower laurels are real but decay normally. Children will react to the undamaged crowns as if they are real, granting the player’s advantage on Charisma checks with children while worn.

On the right path is a long journey that seems to take forever, taking hours to cross to the next hex. At the end of the journey, the players must make a Constitution check to avoid gaining a level of exhaustion. Having crossed the barren landscape, the group encounters a border guard in a small hut by a bridge. The grumpy middle-aged half-troll requires the group to fill out papers and pay a small tax of 2.3% of their carried goods. Then he has them perform calisthenics to prove fitness and good health. Afterwards, he requires them to state their last year of travels and to announce any psychic intrusions. He continues to make ever pettier and useless demands until a player pushes back or the DM runs out of ideas. If they do, he poofs into a cloud of smoke, turning back into Gar. She puts on a serious face to point out that they should follow the rules and they are going to be punished. A perception check is required to notice that each humanoid has has a “Person of Ill-Repute” written on their face, requiring 1d4+1 days to wash off. If they complied with all the demands, Gar unzips herself from the troll ‘costume’ to return the player’s money and give them each a slip of paper that says “Passport” stamped with a shiny gold star. These passports appear as legitimate travel documents for whatever situation they are used in, until they are read, then they appear as they actually are.  The toll booth arm raises up, allowing the players to continue over the bridge and onto their original path.

Blar, god of adults that act like children, and Gar, goddess of children that act like adults, are here to entertain themselves by messing with people. They want to trick people into choosing one of their amusement traps, acting obnoxiously should anyone pay attention to the way in, rather than consider between one of the two options. Choosing to head back actually puts the party on a shortcut to the next hex, saving time.

In any case, once the players have passed through this encounter, there is no sign of their encounter with Blar and Gar, it looks like they had simply sleep-walked for a distance.

[Monster] The Remains of a Defensive, Rare Humanoid

The lush pathway the group travels on converges with a trampled path. Along the path ahead are partially eaten, crushed, bodies of large animals. Blood stains splatter the vegetation on this 10 foot radius cylindrical path broken through the vegetation. A smell of death hangs in the air. Before long, the broken vegetation ends, with the regular path continuing ahead.

If the players continue on this path, a large, feral forest giant leaps from hiding to attack. The green, hairy giant knows no language and has frothing yellow saliva pushing out from its blood-stained lips. This challenging encounter involves a huge giant crawling through this cylinder of cleared vegetation to try and eat the players, hoping to sate its rabies disease. Spittle flies as it lunges with bite attacks, possibly infecting players with the disease if they survive. Healing the giant of the disease will cause it to stop its attack and sheepishly retreat into the undergrowth. It will remain in this hex, remembering the players and leaving them presents of crude furniture, toys, or wild game when they pass through.

If they follow the broken vegetation path to its starting point, they will find a large, dead, female giant. Her lips are stained with blood and dried spit and her eyes bugged out and bloodshot. With a heal check success on investigating, she seems to have perished from complications arising from rabies.

[Monster] The Lair of a Friendly, Uncommon Magical Creature A saltwater lake, a mile across, forces the path the players were taking to route around. Of the two large beast corpses dead on the gravel beach, one seems to stir.

Inside is a teal drake licking its chops of carrion. It charges towards the party, bounding and bouncing along the shore…

…before it gets distracted at the last second sniffing the ground around their feet. Once it smells the party, its attentions will take it elsewhere and then back into the lake. Plied with fresh meat or food, it will take a liking to the party. Difficult animal handling checks over a couple weeks along with a few hundred pounds of meat each week will allow a player to tame the young salt-water drake as if it were an intelligent dog.

If attacked, it will defend itself until it loses half its hit points or it drives off its attackers. To retreat, it will dive into the salt water lake to hide amongst the thick seaweed and kelp.

The drake will remember this interaction, remaining friendly or hostile on future visits as it grows to a larger size and becomes cunning. This orphaned creature is related to a larger saltwater drake used in a dungeon or keep as a guard elsewhere. The two bear the same distinctive green wave pattern on their dorsal scales.

A low area of land turns muddy, then marshy, and before long is swampy. Only the pathway the group follows seems to have any solid ground. Ahead, the same path has skeletal remains of a half dozen horses piled up. Investigating the bones will reveal that the horse throats had been slit by some sort of ragged knife that left behind traces of insect chitin.

These knife marks were left by nearby kobolds raiding a caravan, destroying what they could not use themselves, namely the big-people’s beasts.

[Monster] The Presence of a Hostile, Common Humanoid

A large beaver dam has blocked the incoming river to a thin trickle, leaving a wide swath of silt riverbed exposed. Shadowy movement inside the giant, twenty foot tall dam seems to start as the party comes close.

A bent, old halfling crawls out from a hidden hole in the dam. He lies on the ground, watching the party with a pair of binoculars. Should they try to come close to the riverbed, he shouts in Halflish “This is our panning bed, you stay out.” “You’ve got to the count of three! Oooone! Twooo! THREE!”. If the players are still on the riverbed, a hatch opens in the damn, releasing a few dozen drowsy halflings swarming out in half-donned leather armors with shields and spears. They form a loose phalanx as a few more halflings shamble out, pull long spears from the dam, and reinforce the formation.

The halfling prospectors only speak an archaic dialect of halfling, making it harder for non-speakers to tell that Halflish is being spoken, and moderately difficult for even a native halflish speaker to translate. They, usually rightly, believe that any outsider that learns of their techniques and gold panning locations will alert other prospectors to their claims, even if any given outsider might not want the gold themself. Any parley would need to provide some reasonable measure of assurance that the halflings’ claim won’t be discovered by the group in order for a peace accord to be reached before half the phalanx’s hit points are lost.

Halfling Phalanx, treat as a swarm. 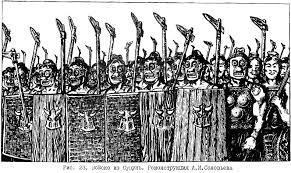 Size H 6 HD MOV 20’ HP 50 STR 18 DEX 11 CON 15 INT 9 WIS 11 CHA 9. ATK x4* (Spears) DAM 1d6+2. *Each 5×5 section of the Phalanx automatically deals its damage to a creature that starts its turn within 10 ft. These sections can reform, so long as all four sections remain contiguous. When the swarm loses all hit points, the halflings scatter, with some ½ of their number left dead from wounds or trampling. Targeted attacks deal half damage to the swarm. The swarm automatically fails Dexterity saves.

Inside the dam is a cramped hovel dug out from the beaver’s nest to accommodate a few dozen halflings in packed bunks. A larger common room is tall enough for a medium sized creature to stand, and has pewter kitchen utensils, a copper cauldron, and wooden flatware. At the other end of the common room is a wooden hatch that leads to a small underwater tunnel to the small lake.

The treasure is not very valuable. No sign of any gold can be found short of magical compulsion of the elder halfling, in which case, the players will be directed to an heriloom copper cauldron as a valuable treasure. With specific instructions for gold, the elder halfling will begrudgingly comply by showing the group to a hollowed out tree stump near the top of the dam that holds a large cache of gold nuggets. This is a solid treasure horde for these commoners but amounts to only a small amount for adventurers.