Your mobility in the sea is the heart of your advantage and should be given a central role in your fighting style. Utilize reach weapons and ranged weapons that can be thrown without loss of speed or power through water. By combining a free mobility in the water with attacks unaffected by the sea, opponents can be fought from relative safety where they cannot retaliate effectively. Against foes on land, quick attacks from the water or hit and run tactics let you retain the defensive advantage of the water while still striking targets that think they are safe on land. For foes equally skilled in the water, nets and entangling weapons can remove their mobility to create openings for similar tactics against land creatures.

F: Fight the fighter from a distance, and keep out of their reach. You can move through the water easily and they cannot. Nets and pinning spears or coral traps will slow them down if they can move in the water. Reach weapons let you strike from beyond their limited movement. On land, they will try to engage you and position you away from the water. Return the favor by pushing them into the water or tactically engaging to deny them the chance.

T: The thief will have trouble getting into position to flank or sneak up on you, but continue to maneuver as if they can. Long tridents and thrown nets will work best to keep you out of a knife’s short thrust or swing. On land, they will be best positioned to surprise you as you return to the water or leap from it to attack. Patience will be your ally, as they will be hard pressed to push into the water, where you can safely wait for ample opportunities while peppering them with thrown weapons.

R: Arrows do not fly well in the water, so use it, the reefs, the seaweed, and disturbed silt for cover and concealment against the ranger. Attack back at a range or with reach weapons in swim-by attacks. If you must engage on land, make your attacks and return to cover. Use distractions so the ranger cannot simply wait to fire until you leave the water for an attack.

W: A wizard will either be singularly outfitted to do the most harm to you, even underwater, or entirely useless until you get on the land. Careful spying of any group with magical potential will be the first step and the second step is to not let them use spells. Put the wizard in the water where they’ll have trouble casting anything with words, drag them in with nets, traps, or physical might. For a wizard equipped with spells able to destroy water, repel it, or attack directly through it, retreat is often the best option. In the case of being unable to retreat, such wizards should be ensared with nets, attacked with thrown weapons, and blocked from having line of sight by rocks or coral.

The Navigated Reefs of Sahuagin Wit

It wouldn’t do to survive the harsh world of the deep seas only to be gutted and served up by land mammals. The thrust of a trident and the weight of a net are powerful tools, but it is cunning that will be your greatest asset. The subtle pull of a clever plan is as unstoppable as the tides, but there are dangers in strategies, sharp corals of flawed thought and foolishness. Learn to dive around these hazards as easily as the razor-sharp shells of the ocean.

Keeping with the tide of wisdom presented above, it will be easy to swim circles around your opponent’s, land and sea. Falling into the traps of ignorance and self-delusion is something that should be left to the water starved sailors drifting cluelessly through the oceans. Sahuagin are above such weaknesses and will take what is their due. 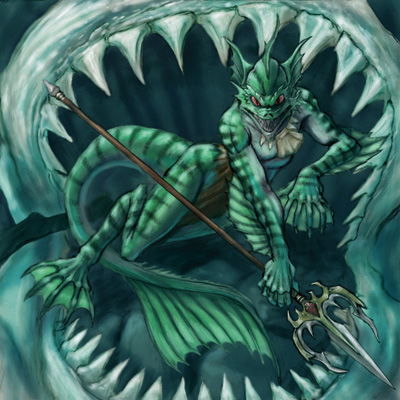