A weird style of cart or a foreign vehicle blocks the path ahead to other vehicles and necessitates a longer retracing of steps and rerouting unless the players want to try and move or disassemble it. Some minor items are on board as well as parts they could repurpose to repair a wagon if they want to take them. Dismantling the cart requires a Driving or Disable Device check (hard and moderate, respectively). Failure nets no usable parts. Failure by ten or more grants one or two spare parts but the disassembler won’t realize that those parts will fail 1d4 rounds after use. Moving the blockage takes enough time and is noisy enough to incur a wandering monster roll while rerouting around it takes fifteen minutes.

Going across a mining bridge of rough-hewn cobble and logs to continue on their way, the party sees a few buildings buried in rubble below. On the far side of the bridge is an overgrown, winding path that goes down into the red-rock ravine.  Taking a closer look, it appears that a number of log cabins are half-buried in the crimson rockslide.

Unless they take their time going down, the path is steep, slippery, and full of thorns, necessitating a Dexterity check. Failure results in taking a small amount of damage but a critical failure results in tumbling down the path for massive damage. A group of crimson mountain lions has taken up residence in the cabins, unusual for the normally solitary animal. Adventurers that slip or fall or take their time alert the mountain cats to their presence, and they will ambush the party at the bottom of the path. Otherwise the large cats will likely smell or hear them as they clamber about the rubble. They fight viciously to defend their cubs in the largest cabin.

Three cabins are visible in the rubble. One is entirely collapsed, the second is smaller but has a large stone chimney, and the third is only partially collapsed and the interior space is mostly filled with grasses and piles of dusty cloth. Examining the chimney reveals it as a small foundry and excavation taking 4 man-hours will expose its casting basin with has a few ingots of precious metals worth 1/10 of the parties “to next level” wealth increase. There are a half dozen small cubs in the largest cabin with a pair of raging mothers that will fight ferociously to defend their young. If the young are captured, a skilled animal handler can raise them or train them for sale of about 1/10 the party’s “to next level” wealth increase. The dried pelts of the adult animals are worth 1/10 the party’s next level wealth increase to a luxury taxidermist or clothier.

This ravine was a mining expedition that hit on hard times. Land deeds were never issued for the mining company as it is between two rival lords. A cave was exposed by the landslide that buried the camp and inside the small cavity, anyone skilled in appraisal or stonework will notice rare ore veins and a few small gems. The main treasure of this encounter is in this rich mine that they could extract a great amount of value from by hiring workers and getting equipment or half that value by selling its location to a prospector. This should total out to about 30% of the party’s wealth increase for this level over time, although they should take care that neither of the two lords seeks to take the mine for themselves or worse that the two lords go to war over the mining rights… An ancient dumping ground for junk and refuse has started to open up thanks to erosion from some recent torrential rains. Great numbers of animals are digging through the garbage heap while smaller predators lurk in the open grassy areas between the debris filled piles and hawks perch on tall trees nearby. The players can either choose to go through the dump, weaving through the spaces between piles or take their travels around the thicker trees growing up around this meadow filled with piles of junk.

Explorations into the piles of junk risks cuts and disease but a few treasures can be spotted by anyone that looks, hinting at greater treasures within. 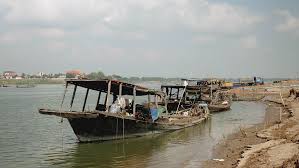 Up ahead is a small lake that is almost a mile across. While you can see the shore all the way around, it would add a half hour to your trek to circumnavigate the lake. In front of you though is a barge run aground and dock on the shore nearby and you can just make out a matching dock across the way. A badly beaten body lies face-down in a pool of water, one hand a stump, near the helm of the barge and numerous boxes are strewn about. Water puddles have been splashed around the barge on this otherwise dry day. The lake is almost mirror smooth but murky so the bottom cannot be seen. The stink of rotting fish hangs over the dock but no fish carcasses are around. The barge-man’s cause of death is drowning, his lungs full of water, despite the beating he has taken. The stump is not a fresh wound and it has a harness for a prosthetic.

Taking the barge, assuming an easy strength check to row or sailing check to set the sails, and you could shave some time off your trek by pulling your wagon and people on board the transport barge. Success shaves off ten minutes from your trip while a failure on this check results in adding 15 minutes to your trip. When you reach the other shore, either by barge or walking, there is a dead body by the other dock. This one has a hook embedded in their collar bone and blood-covered hands frozen in rigor-mortis around the wound. The club at his feet will match the wounds on the barge-man. A recent set of tracks can be identified running down the road away from the scene. With this evidence, it is likely the party could put together what happened, the barge-man suffered a beat but got in a lucky hit and fled on his boat, but only managed to make it to the other side before succumbing to unconsciousness and drowning in a puddle.

If the players report the murders to a nearby town, it will turn out that the barge owner was a well liked semi-recluse who had retired from his days as a rich merchant. He owned this lake and a good amount of land surrounding it, and if the players report the murder, a bounty will go up, per his secret will, that if he should be murdered, whoever catches his murderer will get his lake and possessions. If they don’t report it, the news of the murder, assuming the bodies aren’t disposed of, and bounty will be spread as a local rumor. With no body, rumors will spread of a wealthy old man with a hook who has gone missing. One of his possessions to be passed on is a map and key to his retirement vault. This can either be bank vault in a distant city or the key to a dungeon. The players better hurry because the murder was set up by someone close to him had learned of this secret clause in his will and they intend to turn in the hired thief to claim the prize.